Action recognition has gained significant attention from the computer vision community in recent years. This is a challenging problem, mainly due to the presence of significant camera motion, viewpoint transitions, varying illumination conditions and cluttered backgrounds in the videos. A wide spectrum of features and representations has been used for action recognition in the past. Recent advances in action recognition are propelled by (i) the use of local as well as global features, which have significantly helped in object and scene recognition, by computing them over 2D frames or over a 3D video volume (ii) the use of factorization techniques over video volume tensors and defining similarity measures over the resulting lower dimensional factors. In this project, we try to take advantages of both these approaches by defining a canonical correlation kernel that is computed from tensor representation of the videos. This also enables seamless feature fusion by combining multiple feature kernels.

We represent a video using a 3D tensor, then 3D tensor is flattened into three 2D tensors/matrices. The CCK, which is based on canonical correlation analysis (CCA) and its kernelized version (KCCA), between the two videos is defined as the sum of correlations between the corresponding flattened matrices obtained from both CCA and KCCA. The overview of the computation of CCK is given below 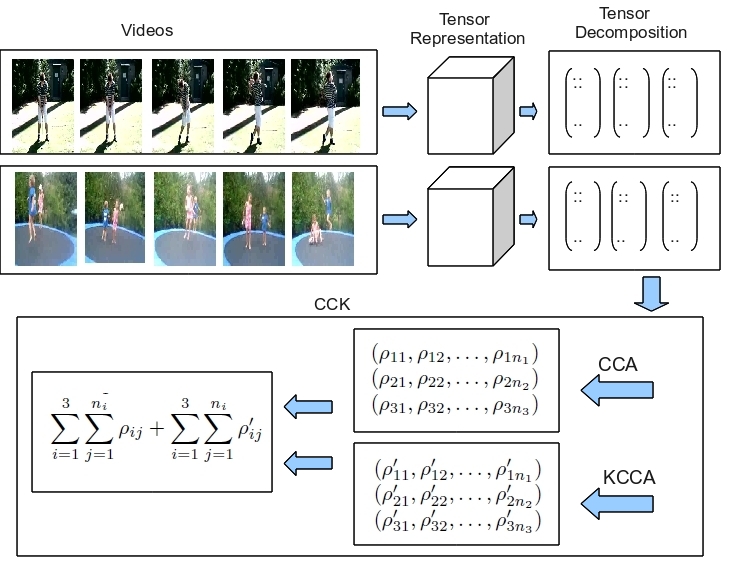 Comparison of CCK with DT (Dense trajectories) over different features.

Comparison of CCK with other methods.