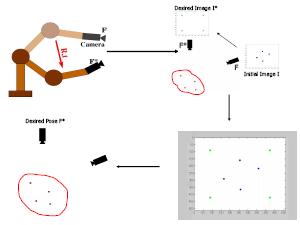 Our research activity is primarily concerned with the geometric analysis of scenes captured by vision sensors and the control of a robot so as to perform set tasks by utilzing the scene intepretation. The former problem is popular in literature as 'Structure from Motion', while the later is often refered as the 'Visual Servoing' problem.

Visual servoing consists in using the information provided by a vision sensor to control the movements of a dynamic system. This research topic is at the intersection of the fields of Computer Vision and Robotics. These fields are the subject of profitable research since many years and are particularly interesting by their very broad scientific and application spectrum. More specifically, we are concerned with enhancing the visual servoing algorithms, both in performance and in applicability so as to widen their use.

Visual servoing is an interesting robotic vision area increasingly being applied to real-world problems. Such an application, however calls for an in-depth analysis of robustness and performance issues in visual servoing tasks. Typically, robustness issues involve handling errors in feature correspondence / pose and depth estimation. On the other hand, performance issues involve generating consistent input in-spite of noisy / varying parameters. We have developed algorithms that incorporate multiple cues in order to achieve consistent performance in presence of noisy features.

Most robotic vision algorithms are proposed by envisaging robots operating in structured environments where the world is assumed rigid and planar. These algorithms fail to provide optimum behavior when the robot has to be controlled with respect to active non-rigid non-planar targets. We have developed a new framework for visual servoing that accomplishes the robot-positioning task even in such unconventional environments. We introduced a novel space-time representation scheme for modeling the deformations of a non-rigid object and proposed a new vision-based approach that exploited the two-view geometry induced by the space-time features to perform the servoing task. 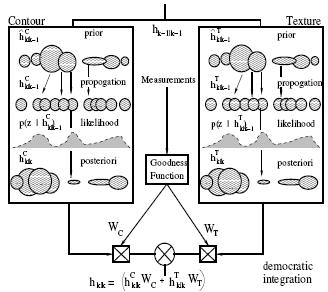 Object tracking is an important task in robotic vision, particularly for visual servoing. The tracking problem has been modeled in the robotic literature as a motion estimation problem. Thus 3D model based tracking is considered as a pose estimation problem and 2D planar object tracking as a homography estimation problem. There are two major sources of visual features that are used in marker-less visual tracking, edges and texture. Both visual features have advantages and disadvantages that make them suitable/unsuitable in many scenarios. we are designing a robust integration framework using both edge and texture features. This frame work probabilistically integrates the visual information collected from contour and texture. The integration is based on probabilistic goodness weights for each type of feature.