Proxy Based Compression of Depth Movies

Sensors for 3D data are common today. These include multicamera systems, laser range scan- ners, etc. Some of them are suitable for the real-time capture of the shape and appearance of dynamic events. The 2-1/2 D model of aligned depth map and image, called a Depth Image, has been 1 popular for Image Based Modeling and Rendering (IBMR). Capturing the 2-1/2D geometric structure and photometric appearance of dynamic scenes is possible today. Time varying depth and image sequences, called Depth Movies, can extend IBMR to dynamic events. The captured event con- tains aligned sequences of depth maps and textures and are often streamed to a distant location for immersive viewing. The applications of such systems include virtual-space tele-conferencing, remote 3D immersion, 3D entertainment, etc. We study a client-server model for tele-immersion where captured or stored depth movies from a server is sent to multiple, remote clients on demand. Depth movies consist of dynamic depth maps and texture maps. Multiview image compression and video compression have been studied earlier, but there has been no study about dynamic depth map compression. This thesis contributes towards dynamic depth map compression for efficient transmission in a server-client 3D teleimmersive environment. The dynamic depth maps data is heavy and need efficient compression schemes. Immersive applications requires time-varying se- quences of depth images from multiple cameras to be encoded and transmitted. At the remote site of the system, the 3D scene is generated back by rendering the whole scene. Thus, depth movies of a generic 3D scene from multiple cameras become very heavy to be sent over network considering the available bandwidth. 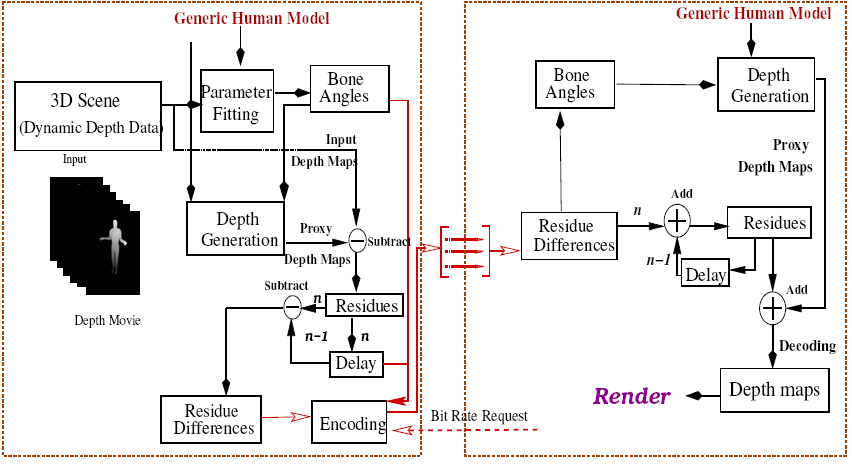 This thesis presents a scheme to compress depth movies of human actors using a parametric proxy model for the underlying action. We use a generic articulated human model as the proxy to represent the human in action and the various joint angles of the model to parametrize the proxy for each time instant. The proxy represents a common prediction of the scene structure. The difference between the captured depth and the depth of the proxy is called as the residue and is used to represent the scene exploiting the spatial coherence. A few variations of this algorithm are presented in this thesis. We experimented with bit-wise compression of the residues and analyzed the quality of the generated 3D scene. Differences in residues across time are used to exploit temporal coherence. Intra-frame coded frames and difference-coded frames provide random access and high compression. We show results on several synthetic and real actions to demonstrate the compression ratio and resulting quality using a depth-based rendering of the decoded scene. The performance achieved is quite impressive. We present the articulation fitting tool, the com- pression module with different algorithms and the server-client system with several variants for the user. The thesis first explains the concepts about 3D reconstruction by image based rendering and modeling, compressing such 3D representations, teleconferencing, later we proceed towards the concept of depth images and movies, followed by the main algorithms, examples, experiments and results.