Extracting the relevant information out of a large number of documents is quite a challenging and tedious task.The quality of results generated by the traditionally available full-text search engine and text-based image retrieval systems is not very optimal. These Information Retrieval(IR) tasks become more challenging with the non-traditional language scripts for example in the case of Indic scripts. We have developed OCR (Optical Character Recognition) Search Engine which is an attempt to make an Information Retrieval and Extraction (IRE) system that replicates the current state-of-the-art methods using the IRE and basic Natural Language Processing (NLP) techniques. In this project we have tried to demonstrate the study of the methods that are being used for performing search and retrieval tasks. We also present the small descriptions of the functionalities supported in our system along with the statistics of the dataset. We use Indic-OCR developed at CVIT, for generating the text for the OCR Search Engine. 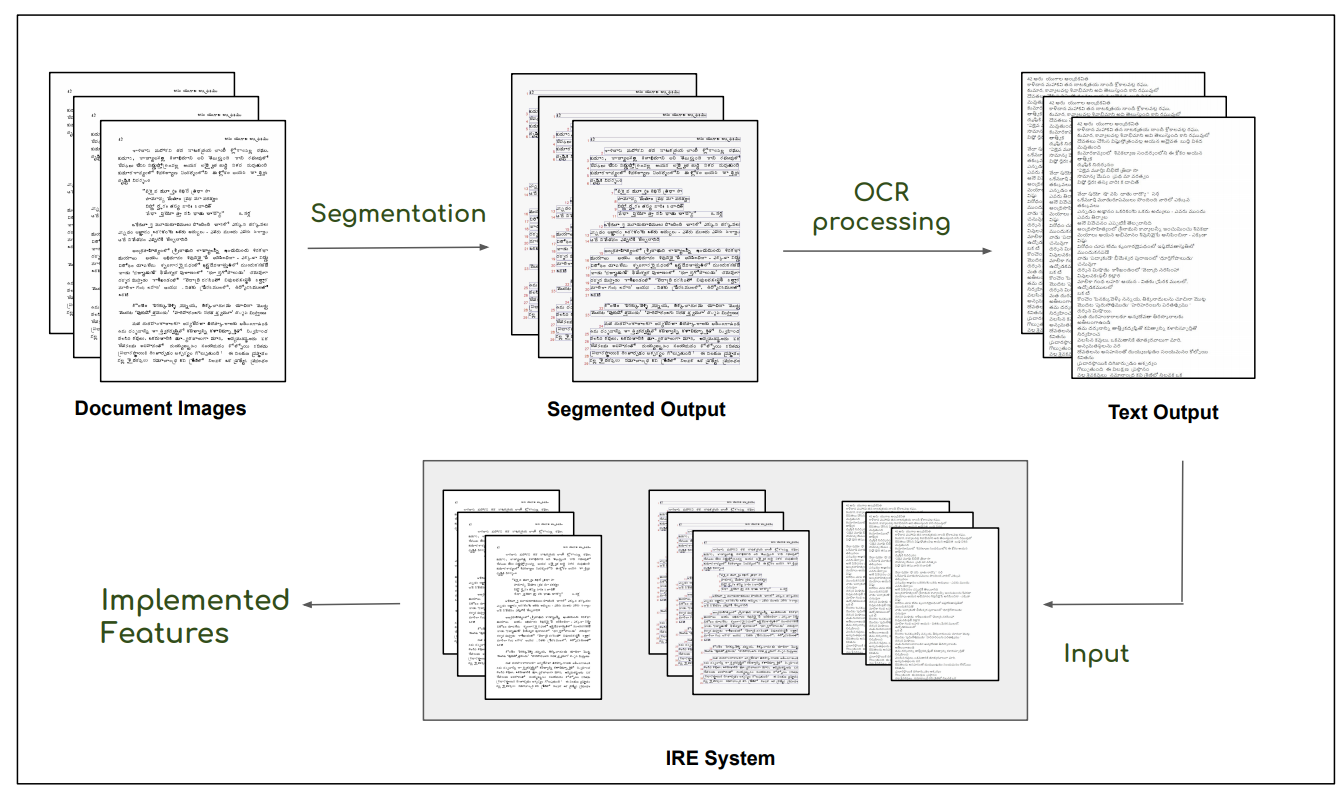 Functionalities implemented in the IRE system

The developed IRE system performs the following functionalities on the user end:

The dataset provided for use consists of more than 1.5 million documents in languages Hindi, Telugu and Tamil (~ 5 lacs each). This dataset consists of the books from various genres such as religious texts, historical texts, science and philosophy. Dataset statistics are presented in the table given below.

Statistics of the NDLI dataset and the British Library dataset.

In addition to the existing Indic languages, we are also working on the Bangla data which is provided to us by the British Library. Our OCR model is trying to improve the text predictions for the same which will help in achieving better search results.

This work was supported, in part, by the National Digital Library of India (IIT Kharagpur) who provided us with more than 1.5 million document images in Indian languages (Hindi, Tamil and Telugu). We also thanks British Library for providing us with the ancient document images in Bangla language. I would also like to acknowledge Krishna Tulsyan for assisting the project, initially.

For further information about this project please feel free to contact :
Riya Gupta - This email address is being protected from spambots. You need JavaScript enabled to view it.
Dataset and Server Management: Varun Bhargavan, Aradhana Vinod [varun.bhargavan;aradhana.vinod]@research.iiit.ac.in

Historical palm-leaf manuscript and early paper documents from Indian subcontinent form an important part of the world’s literary and cultural heritage. Despite their importance, large-scale annotated Indic manuscript image datasets do not exist. To address this deficiency, we introduce Indiscapes, the first ever dataset with multi-regional layout annotations for historical Indic manuscripts. To address the challenge of large diversity in scripts and presence of dense, irregular layout elements (e.g. text lines, pictures, multiple documents per image), we adapt a Fully Convolutional Deep Neural Network architecture for fully automatic, instance-level spatial layout parsing of manuscript images. We demonstrate the effectiveness of proposed architecture on images from the OpalNet dataset. For annotation flexibility and keeping the non-technical nature of domain experts in mind, we also contribute a custom, webbased GUI annotation tool and a dashboard-style analytics portal. Overall, our contributions set the stage for enabling downstream applications such as OCR and word-spotting in historical Indic manuscripts at scale.

Owing to the overparametrized nature and high memory requirements of classical DNNs, there has been a renewed interest in network sparsification. Is it possible to prune a network at initialization (prior to training) while maintaining rich connectivity, and also ensure faster convergence? We attempt to answer this question by emulating the pattern of neural connections in the brain.

Figure: After a preliminary pruning step, N2NSkip connections are added to the pruned network while maintaining the overall sparsity of the network.

The over-parametrized nature of Deep Neural Networks (DNNs) leads to considerable hindrances during deployment on low-end devices with time and space constraints. Network pruning strategies that sparsify DNNs using iterative prune-train schemes are often computationally expensive. As a result, techniques that prune at initialization, prior to training, have become increasingly popular. In this work, we propose neuron-to-neuron skip (N2NSkip) connections, which act as sparse weighted skip connections, to enhance the overall connectivity of pruned DNNs. Following a preliminary pruning step, N2NSkip connections are randomly added between individual neurons/channels of the pruned network, while maintaining the overall sparsity of the network. We demonstrate that introducing N2NSkip connections in pruned networks enables significantly superior performance, especially at high sparsity levels, as compared to pruned networks without N2NSkip connections. Additionally, we present a heat diffusion-based connectivity analysis to quantitatively determine the connectivity of the pruned network with respect to the reference network. We evaluate the efficacy of our approach on two different preliminary pruning methods which prune at initialization, and consistently obtain superior performance by exploiting the enhanced connectivity resulting from N2NSkip connections.

In this work, inspired by the pattern of skip connections in the brain, we propose sparse, learnable neuron-to-neuron skip (N2NSkip) connections, which enable faster convergence and superior effective connectivity by improving the overall gradient flow in the pruned network. N2NSkip connections regulate overall gradient flow by learning the relative importance of each gradient signal, which is propagated across non-consecutive layers, thereby enabling efficient training of networks pruned at initialization (prior to training). This is in contrast with conventional skip connections, where gradient signals are merely propagated to previous layers. We explore the robustness and generalizability of N2NSkip connections to different preliminary pruning methods and consistently achieve superior test accuracy and higher overall connectivity. Additionally, our work also explores the concept of connectivity in deep neural networks through the lens of heat diffusion in undirected acyclic graphs. We propose to quantitatively measure and compare the relative connectivity of pruned networks with respect to the reference network by computing the Frobenius norm of their heat diffusion signatures at saturation. 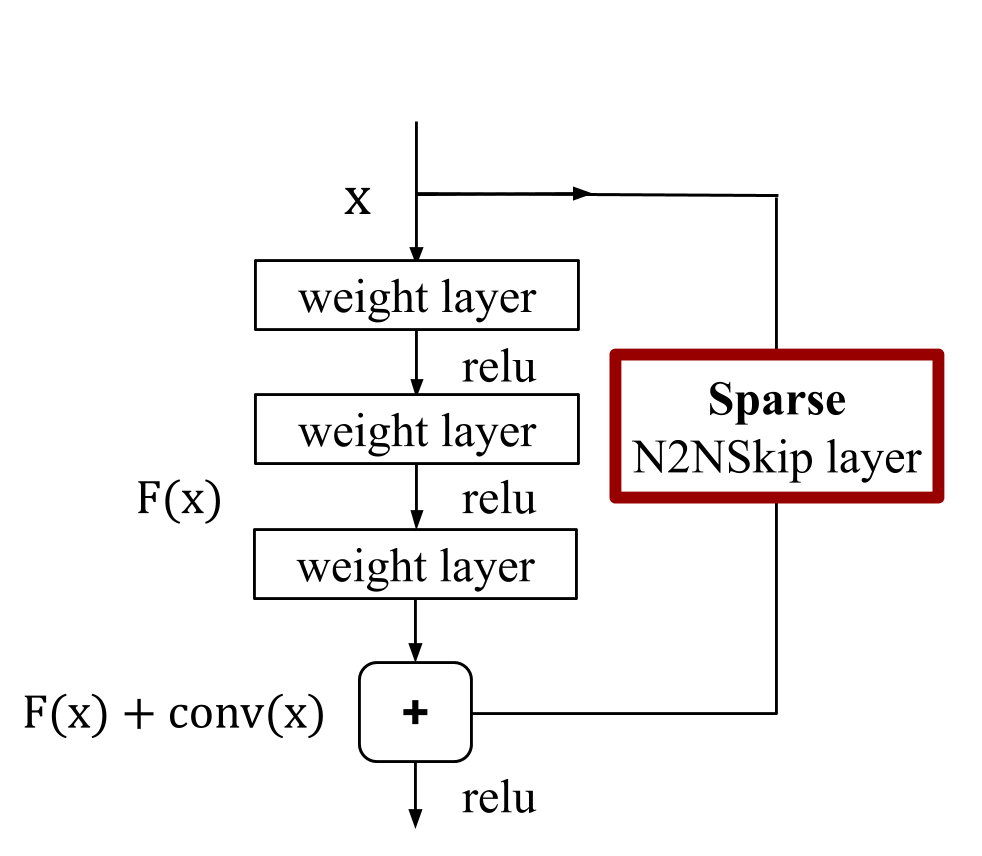 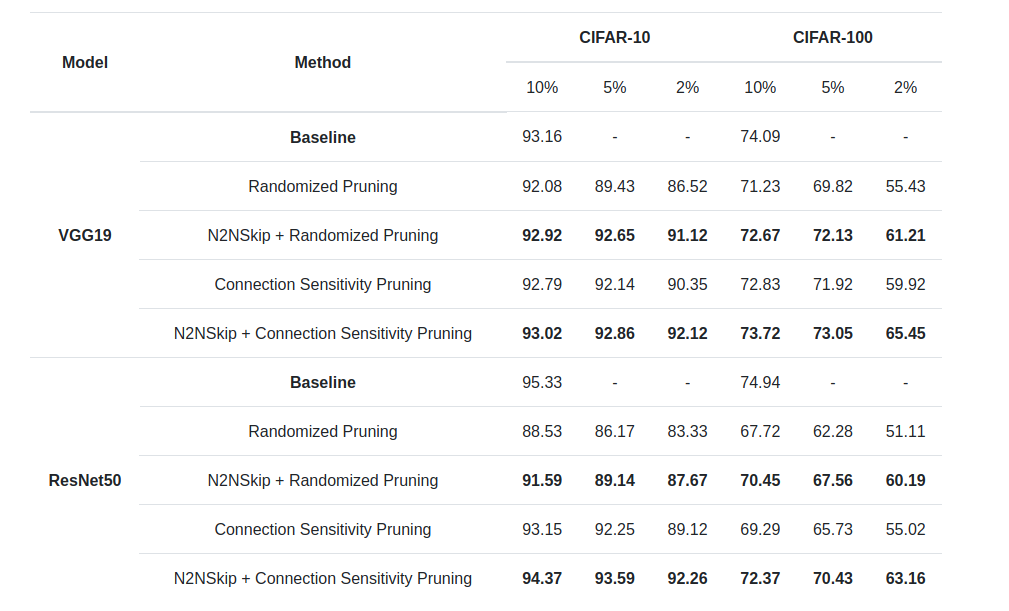 Test Accuracy of pruned ResNet50 and VGG19 on CIFAR-10 and CIFAR-100 with either RP or CSP as the preliminary pruning step. The addition of N2NSkip connections leads to a significant increase in test accuracy. Additionally, there is a larger increase in accuracy at network densities of 5% and 2%, as compared to 10%. This observation is consistent for both N2NSkip-RP and N2NSkip-CSP, which indicates that N2NSkip connections can be used as a powerful tool to enhance the performance of pruned networks at high compression rates.

n this paper, we study current and upcoming frontiers across the landscape of skeleton-based human action recognition.To begin with, we benchmark state-of-the-art models on the NTU-120 dataset and provide multi-layered assessment of the results. Toexamine skeleton action recognition 'in the wild', we introduce Skeletics-152, a curated and 3-D pose-annotated subset of RGB videossourced from Kinetics-700, a large-scale action dataset. The results from benchmarking the top performers of NTU-120 onSkeletics-152 reveal the challenges and domain gap induced by actions 'in the wild'. We extend our study to include out-of-contextactions by introducing Skeleton-Mimetics, a dataset derived from the recently introduced Mimetics dataset. Finally, as a new frontier foraction recognition, we introduce Metaphorics, a dataset with caption-style annotated YouTube videos of the popular social game DumbCharades and interpretative dance performances. Overall, our work characterizes the strengths and limitations of existing approachesand datasets. It also provides an assessment of top-performing approaches across a spectrum of activity settings and via theintroduced datasets, proposes new frontiers for human action recognition.

OCR for printed classical Indic documents written inSanskrit is a challenging research problem. It involves com-plexities such as image degradation, lack of datasets andlong-length words. Due to these challenges, the word ac-curacy of available OCR systems, both academic and in-dustrial, is not very high for such documents. To addressthese shortcomings, we develop a Sanskrit specific OCRsystem. We present an attention-based LSTM model forreading Sanskrit characters in line images. We introduce adataset of Sanskrit document images annotated at line level.To augment real data and enable high performance for ourOCR, we also generate synthetic data via curated font se-lection and rendering designed to incorporate crucial glyphsubstitution rules. Consequently, our OCR achieves a worderror rate of 15.97% and a character error rate of 3.71%on challenging Indic document texts and outperforms strongbaselines. Overall, our contributions set the stage for ap-plication of OCRs on large corpora of classic Sanskrit textscontaining arbitrarily long and highly conjoined words. 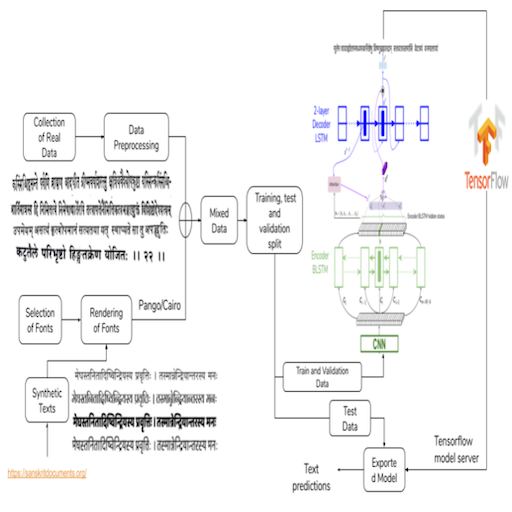 If you find our work useful in your research, please consider citing: